Report, as always, nicked from the Many Shades forum

Many Shades stumble as Pompey romp to title.

The two Many Shades’ keepers show off their ball-handling skills
(l-r Keith, Dave)

The Yellows got off to the better start, beating the Greys 3-0 in their opening game, and followed this up with a comfortable 2-0 win over Bognor Regis Town’s walking footballers – they need a nickname; the parent club are known as the Rocks, what are the oldest rocks on the planet again? Oh yes, Acasta Gneiss… now that trips off the tongue, not! The Yellows then went on to beat a lively Southampton side 1-0 in their third match, a rare 100% record that put them top of the table at that point.
But there was, as ever, a catch. And for the Yellows it was that they only had a squad of six players for a six-a-side tournament, one of their younger selections completely forgetting that he was meant to turn up and play, and all of the other players that came along to watch pleading injury. So on a hot day, with no rest at all, the sweaty six began to feel the heat, and Mountbatten duly beat them 3-0, including a penalty awarded after a save from Jeff Pickering. It was just that Keith McNeil was in goal at the time. Anyway, Jeff had fumbled a straightforward save, so his bid to have a rest by going in goal was unceremoniously thrown out, and the ref further penalised him by refusing to send him off.

Unsurprisingly the Yellows staggered on to a 5-0 defeat by the well-subbed and still very active Pompey ITC, meaning that in the end they finished third on nine points. The Many Shades of Yellow squad was Keith McNeil, Jeff Pickering, Stew Russell, Richard Bishop, Derek Pope, and Bobby De Ste Croix. Goals came from Bobby (2), Richard (3) and Derek (1).

Meanwhile the seven-man Greys struggled against some strong opposition in their opening games, with a 3-1 defeat to Mountbatten in the second game, before going down 3-0 to Pompey ITC to leave them just above Bognor on goal difference at the bottom with zero points after three games. Were they downhearted? Yes, but they kept it together and ground out a solid 0-0 draw against Southampton in their fourth match, before facing the Rocks (Acasta Gneiss?) in the final round.

This final game lasted forever, with several minutes of added time having to be played following a nasty clash of heads when Bognor’s John Tallentire stumbled and collided forehead to forehead with the Grey’s Ian Warren. Both players were cut above the eye, and Grey’s goalkeeper Dave Hall was out of his blocks like Usain Bolt to grab the medical bag and apply his genuinely professional first aid skills. Eventually both players were able to continue, both trying to do their best Terry Butcher impression with well-bandaged heads – fortunately the impressions failed on the dripping blood side of the task! The headline inevitably was “Hawks go head-to-head with Rocks”, and both sides came away with a vaguely satisfying 1-1 draw. The Many Shades of Grey squad was Dave Hall, Pete Dolamore, Barry Ingram, Ian Warren, John Toman, Colin Baker, and John Hicks. Goals were from John Hicks and a rare collector’s item from Barry Ingram. 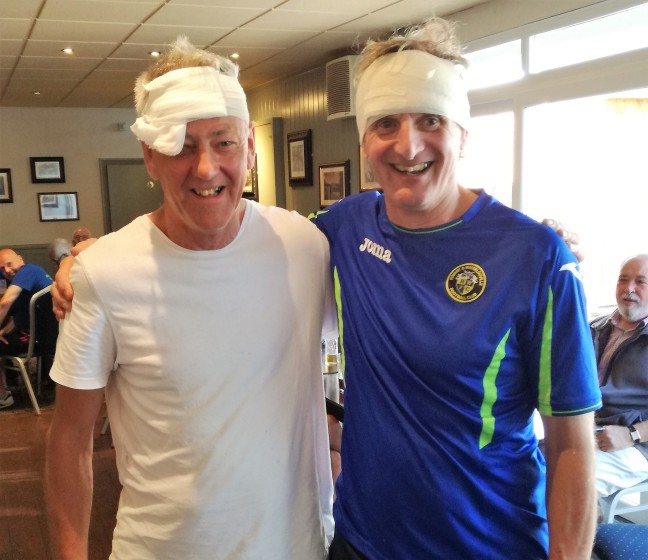 “Play walking football”, they said. “It’ll keep you fit and healthy”, they said.
John from Bognor and Ian from the Many Shades show off their very impressive head wound dressings at the post-tournament buffet

Both Ian and John later went to hospital for check-ups, but not before they had been back to the Westleigh to enjoy another of Suzette Gray’s stunning buffets. Huge thanks to her of course, but also to the referees on the day – Barrie Gray, Jackie Binnington from Hants FA (our first female referee), and Graham Wilson. Final positions were that 100% winners Pompey ITC headed the table and collected the coveted trophy, with Mountbatten a solid second on 12 points. The Many Shades of Yellow were third, Southampton DFA fourth, the Many Shades of Grey fifth, and the plucky newcomers from Bognor Regis a bloodied but unbowed sixth.