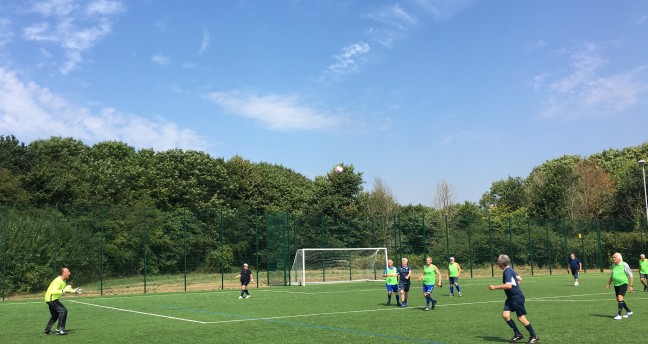 With Public Health England issuing a “heatwave alert” and the Daily Express predicting the hottest day since the Precambrian period, some sensible precautions were taken during Thursday morning’s training session.

Firstly, protective headwear and sunglasses were de rigeur proving that the Many Shades can remain both fashionable and cool. 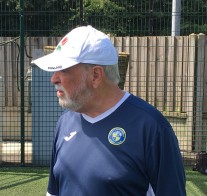 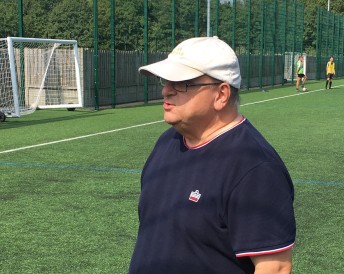 Secondly, regular fluids were taken on board to maintain hydration levels. 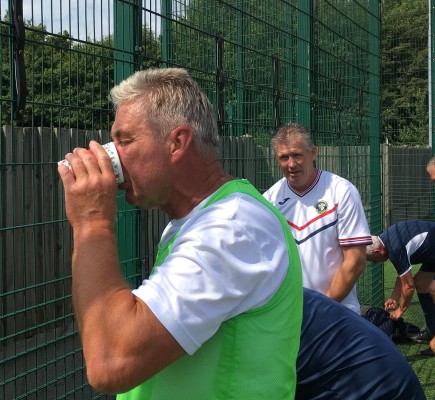 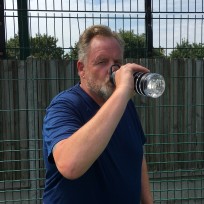 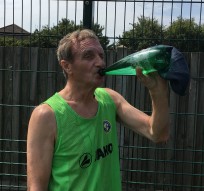 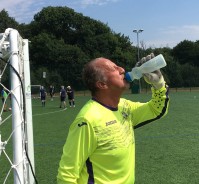 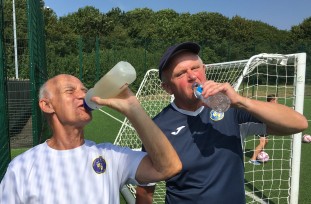 Adhering to these precautions and taking regular breaks meant that everyone survived the session and made it back to the Westleigh in one piece for a well-earned cuppa. 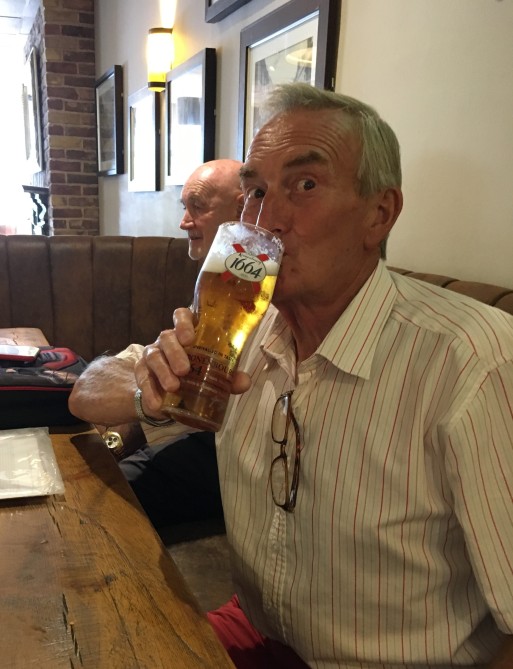 Of course, Barrie has his own method of keeping cool!

N.B. If Mrs. Gray is reading this, I should stress that this is a photoshopped image and at no time was Barrie in the club on Thursday lunchtime drinking Kronenbourg lager when he should have been working. Probably.

But despite all our efforts, the extreme heat just got to some people. Here Stew can be seen taking advantage of Martin’s pitch sprinkler system.
So, if you’re at the Wimbledon friendly on Friday evening and spot a Stew-shaped dry patch of turf on the Westleigh Park pitch, you now know why.

Yes, on World Cup Final day we held our 50+ Summer Walking Football Festival, re-branded as the World Cup Festival, with the reward of watching the game on tv whilst filling our slender tummies with Suzette Gray’s awesome buffet.

The day started with some sweltering weather as this summer’s heatwave showed no signs of giving us a break.  Copious amounts of water were supplied, and consumed.  The WAGs retreated to the shade of the trees, their own executive box with prawn sarnies to follow.

The WAGs settle down for an afternoon of high quality entertainment

In the second round of matches the Volunteers drew again, this time 1-1 thanks to a John Hicks goal earning the point against Solent City.  The Grey’s second match was a tight encounter against Gosport CS, and finished 0-0.  Unbeaten so far.  In the other match Emsworth earned a comfortable 3-0 win against Alton to go top of the table.

John clean through on goal

The Greys were then up against Emsworth in a top-of-the-table battle, and thanks in no small part to Darryl Horn in goal another Rich Bishop goal proved to be the winner, and top spot was reached. Sadly the unbeaten tag went as the Volunteers finally succumbed to the well-drilled Gosport side by 2-0.  The other game saw Alton and Solent draw 0-0.

The crunch game then came along, as the Greys faced the Volunteers, and pride was the least of issues on the table.  It was settled in favour of the Greys by a Jeff Pickering goal, the unfortunate Colin Jeffery in the Volunteers’ goal finding out why Jeff’s original nickname at the club was “Thunderboots” [Really, who writes this stuff – Ed].  Meanwhile Emsworth and Gosport both registered 1-0 wins over Solent and Alton respectively.

On to the final round of matches, and with the heat now a significant factor, it was six very tired teams that took to the field.  The Greys loaned Pete Brown to the Volunteers as they had a couple of players unable to continue in the conditions.  Unfortunately even Pete’s presence couldn’t help the Volunteers as they crashed wearily 4-0 to Emsworth.  Gosport and Solent played out a 0-0 draw, while the Greys needed to avoid defeat to secure the title.  Alton proved a tough nut to crack, and it took a great team move that led to Stew Russell scoring for a much-needed lead.  When Rich Bishop scored again in the second half the win was assured, and it finished 2-0. 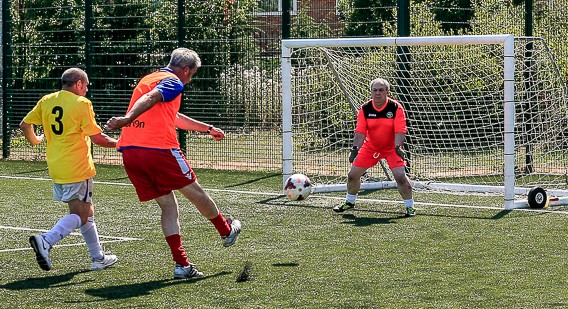 CJ was kept busy in goal for the Volunteers 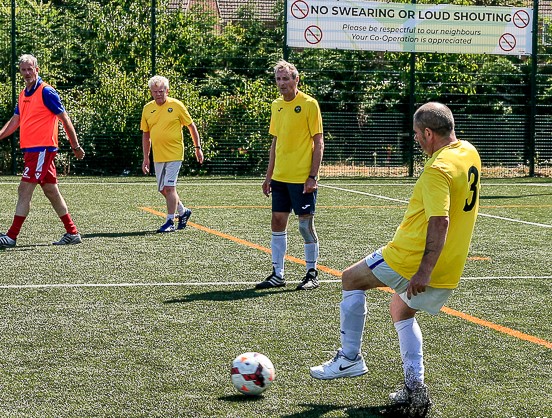 For once, Steve takes heed of the useful advice on the fence

Huge thanks to Graham Wilson, Dave Lester, and Dave Rowbrey for their patient and consistent refereeing (no VAR, so no confusion).  Of course, great thanks as well to Suzette and Natalie for their fantastic buffet.  Well done to Solent City who earned themselves a round of drinks by correctly predicting that France would be playing in the Final.

Also thanks are due to our photographer Geoff Maunder whose album of the day is at https://www.flickr.com/photos/138981462@N02/albums .

With the temperature at Westleigh Park high in the 80’s (or 30’s in new money) and the Daily Express claiming, probably, that Havant was hotter than Honolulu, the Many Shades found themselves on the hallowed turf at half time during the Hawks’ pre-season friendly v. Portsmouth to collect the National League Trust Award for Best Project for Older People.

With Stewart holding tightly on to the trophy and the cheque, handshaking duties fell to John Morgan. Many thanks to Brian Lee MBE from the National League Trust who battled with the pre-World Cup quarter final traffic to make the presentation.

The more retentive amongst you will recall that this is not the first time we have received this award. A similar presentation was made by the National League Trust in 2016. A big pat on the back is due to all in the Havant & Waterlooville Community team and to our own Stewart Russell for all their hard work.

Stewart shows off the trophy to the Hawks v. Portsmouth crowd whilst holding his tummy in. Who says men can’t multi-task?